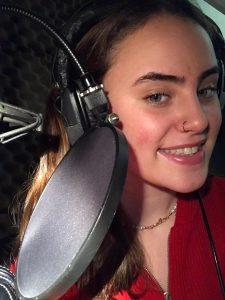 Cool, husky and characterful, at the age of 18 you might be mistaken into thinking that Emily would be a novice to the world of voiceovers. Wrong, as a veteran of around 120 professional bookings Emily has been doing this since she was six years old. She knows what she’s doing. Don’t be surprised if she nails your script first take.

Besides countless commercials, e-learning and explainer films, high profile credits include as a TV continuity announcer and promo voice for CITV, and when she was only eleven years as the voice on three tracks of the Celtic Metal band Eluveitie on their number one Origins album.

Emily works from JC‘s professional home studio and can be booked at short notice (subject to school hours) by calling 07715 620 488 or emailing here.

At the age of 13 William is also a veteran of the voiceover world with a long list of very high profile credits.

National radio campaigns include for Sainbury’s, Marks and Spencer and this national TV commercial playing the part of a lamb for Dunelm. He was only eight at the time though so it’s fair to say his voice might have changed a little since then.